Last week I went shopping in our local department store and bought two new duvet covers in the sale.
(I actually went to shop for pants but failed on that front...!)
We have a king-size duvet so I was obviously looking at their selection of that particular size when I happened to notice a nice design in the super-king size. It just so happens that these larger covers were even cheaper than their king-size versions - what a bargain!
I suppose there is less demand for the very large size.

Obviously, I decided to have more for my money and bought two super-king sized duvet covers at 75% off! Oh, I do love a bargain.


Today, (Friday is bed stripping day), I measured my old cover and worked out how much to trim from my new covers.

19.5 inches turned out to be the amount to be cut away, so I lay my cover out across my cutting table and, using my cutting ruler, marked out my stitch line with pins.

Just a thought. If you are doing this you might find that the cover has only one side seam, the other side being a fold. If this is the case, it makes sense to trim the folded side so that you have a larger width of leftover fabric to play with...

I used my overlocker to stitch and trim at the same time but a sewing machine and a pair of scissors would have done a grand job.
(If you do use the sewing machine option, don't forget to use an overcast stitch to stop the raw edges from fraying.)

I sewed a few inches in from the new seam along the opening with a straight stitch (I removed the buttons that were no longer required) to match the other side.

So, job done as far as the duvet cover is concerned.

Now for the pillow cases. 19.5 inches is plenty wide enough for one of our pillows. I know it should go without saying but I'll say it anyway - make sure you check before you start.

It's a good mantra but maybe twice is not often enough...

Don't forget that your pillow has a height as well as a width and length. Drape your tape measure over your pillow and add 1 inch for the seams plus a further 1 inch for ease to find the width.

If in doubt, make it as big as your fabric will allow because it's a very easy job to re-stitch it smaller if it's too loose but if it's too tight, you have a big (or rather small) problem!

For each pillow case you need to have two sides of equal width, one several inches longer than the other to make the tucking-in flap (is that what it's called...?)

To find the shorter length, drape your tape measure over the pillow from one end to the other and add 1/2 inch for the seam plus 1 inch for the seam at the opening plus 2 inches ease. I have a moulded memory foam pillow which has a definite height so I measured from the middle of the height at each end.

For the longer length, add a further 5-9 inches to the measurements. (I added 9 inches, just because I could, but I think that is rather too much.)

The measurements I ended with are:- 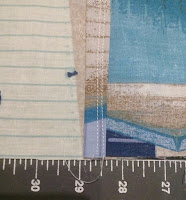 Press under 1 inch at the opening end of each piece, fold under the raw edge and stitch down. 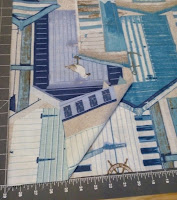 Now fold the flap over the top of the shorter piece, enclosing the opening.

This can be pinned and stitched or just stitched (my idea of living dangerously...).

I found it best to stitch the raw end first then stitch from there to the folded edge on each side. This prevents a little pleat in the bottom edge. Hmmm...

Fold back the flap and then turn right side out.

Some time later, I have two duvet covers and 4 pillow cases for less than the price of a duvet cover! Now that's Magic!

(For the record, I bought pants elsewhere on my next shopping expedition.) 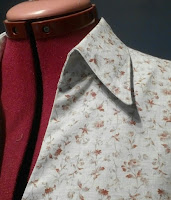